Hands down, the City Museum in St Louis is the most innovative space I have ever been in. It is a 600,000 square foot, multi-story work of art housed in the former International Shoe Company building. Designed and built by artist, Bob Cassilly, 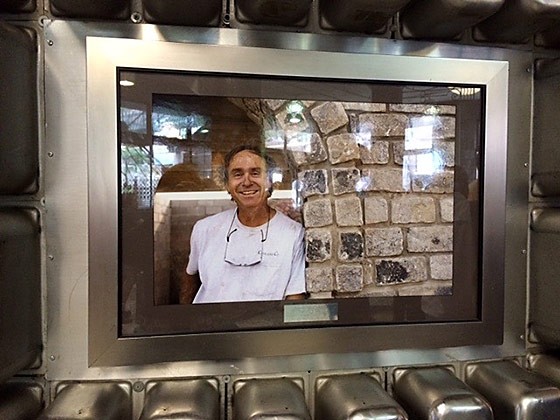 every inch of the place is made from salvaged materials – everything from old steam table pans to machine shop discards. The best part is, there is hardly a spot that you’re not allowed to climb on or in. Cassilly himself dubbed it, “A million square feet of possibility”.

I found myself there last weekend with my cousin and his family – we had a few hours to kill between the farmer’s market and the Cardinal’s game. While most everyone else braved climbing through tunnels of coiled steel and careening down the 10-story slide, I chose to capture what I could of the materials, colors, and shapes within the architecture of the space.

The first stop were the restrooms, whose exterior walls were made out of old steam table pans. 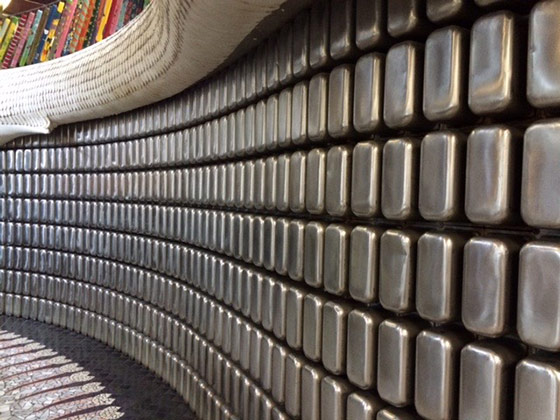 Directly across from the bathrooms was the 2-story slide with painted conveyor belt rollers as the enclosure. 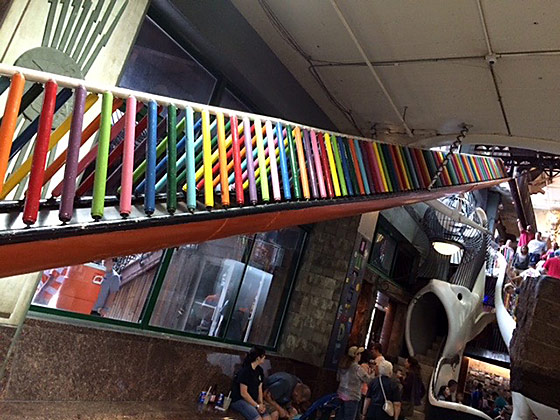 There are also many railings that used the conveyor belt rollers as well. 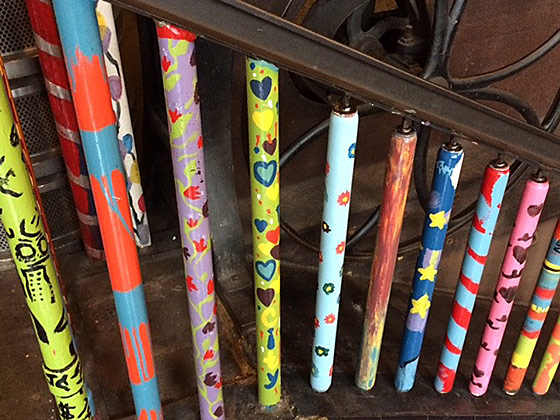 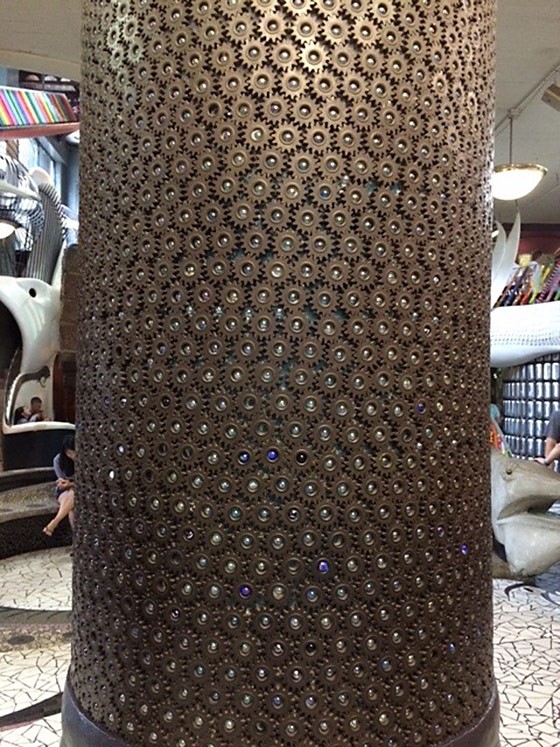 Walking out onto the 3rd story balcony, you have your choice to go in a million different directions, often through these coiled steel tubes that make you feel like you’re crawling through air. 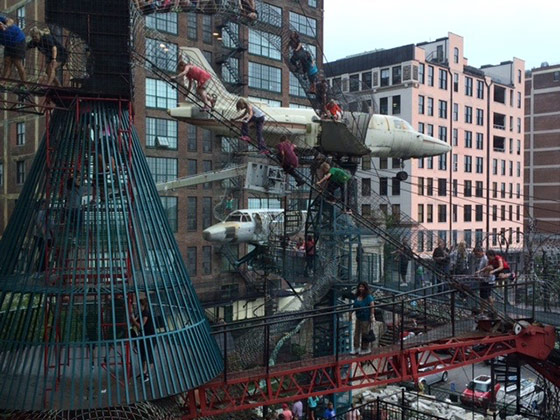 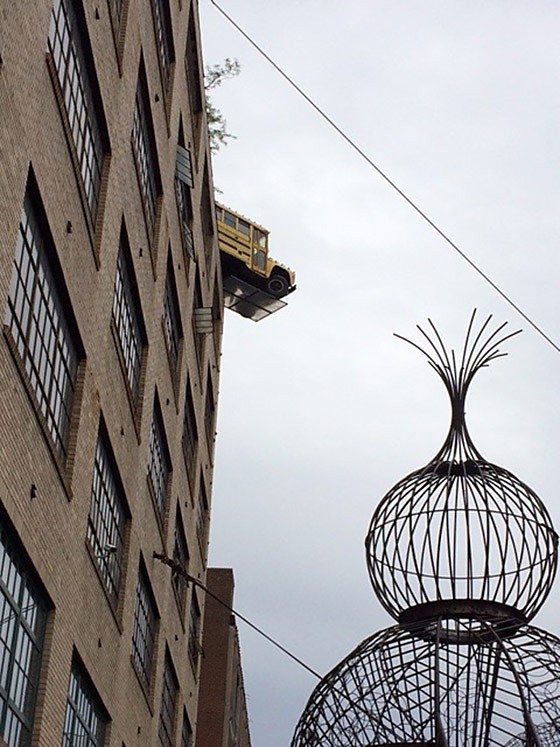 There was no way I was going to get myself stuck inside those spiral tubes, but it was fun to see the littler people wending their way through. 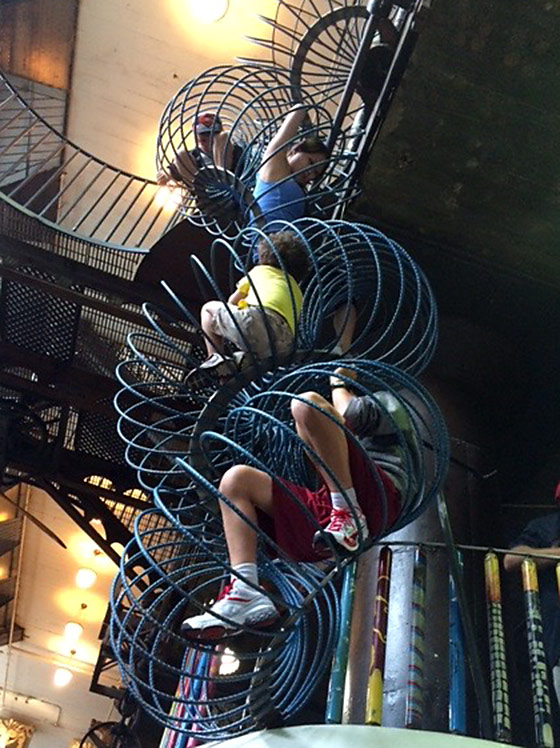 And then there were the critters that inhabited every nook and cranny, on pillars, 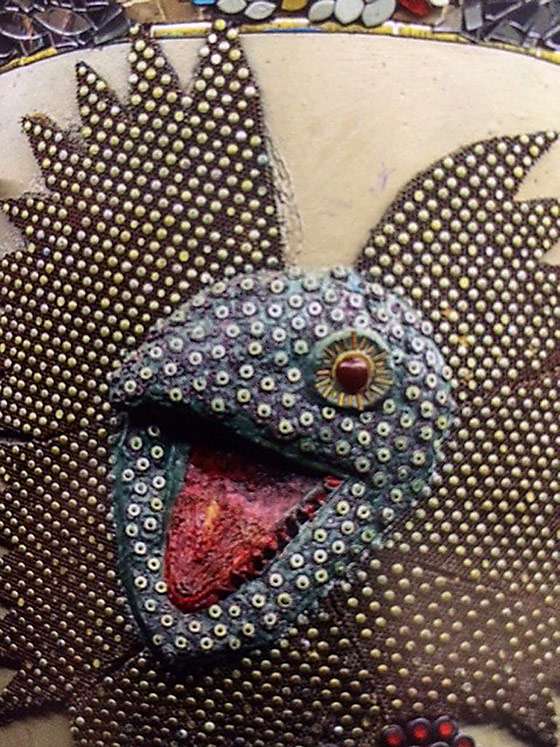 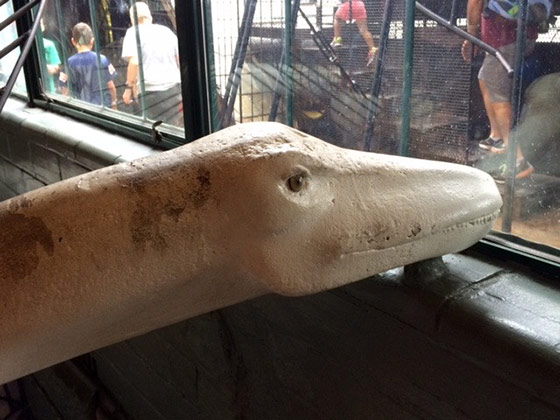 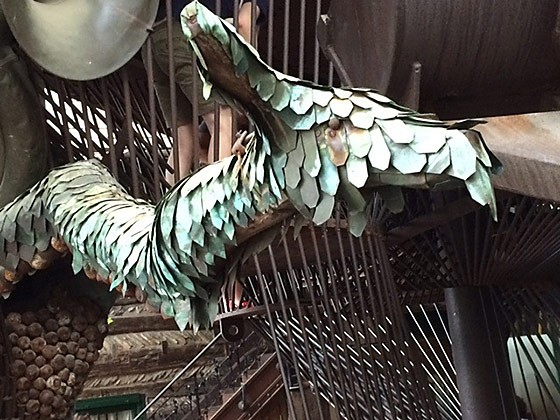 and historic building fragments taken out of context, 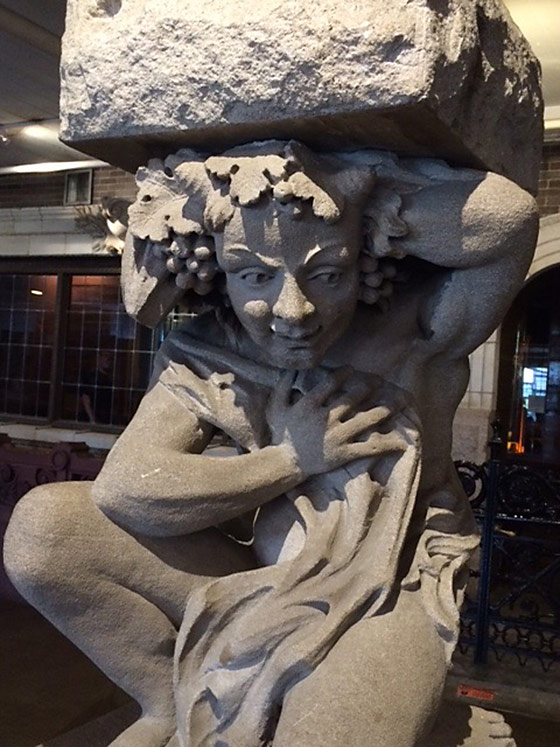 and combined with other materials. 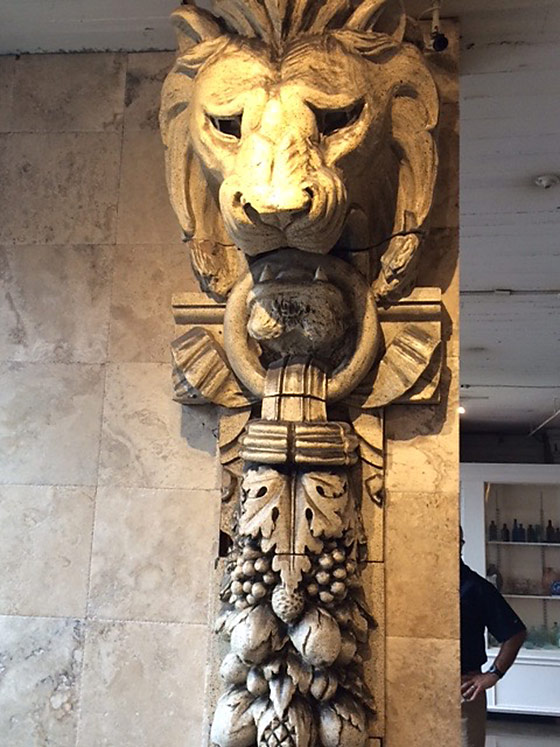 The textures of grouped materials were amazing. 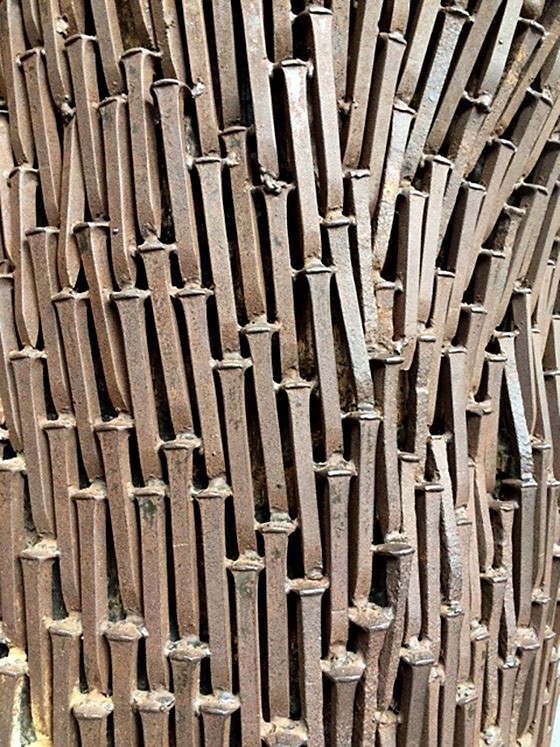 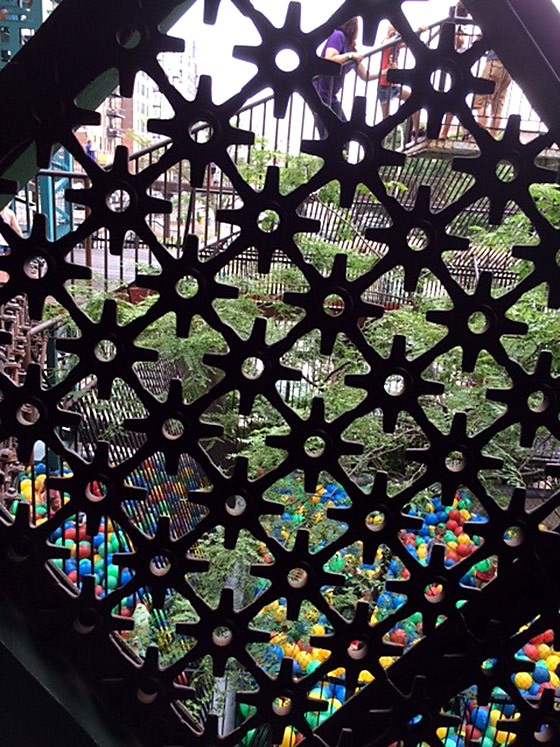 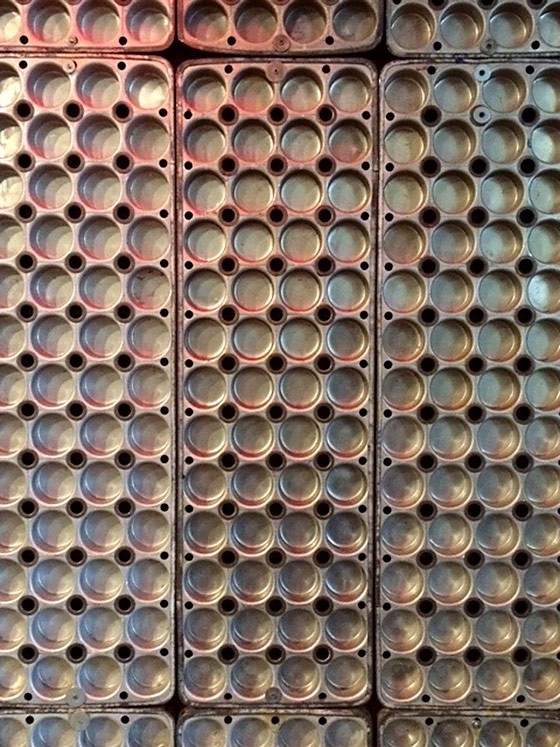 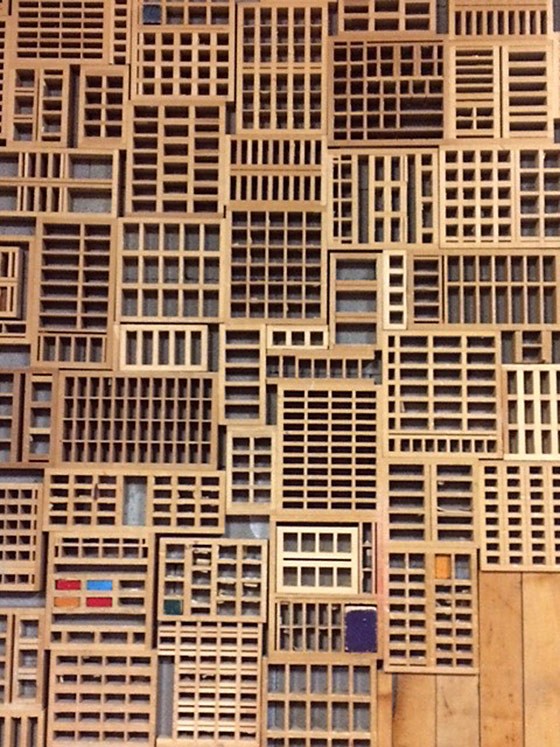 Stairs and railings were especially inventive. 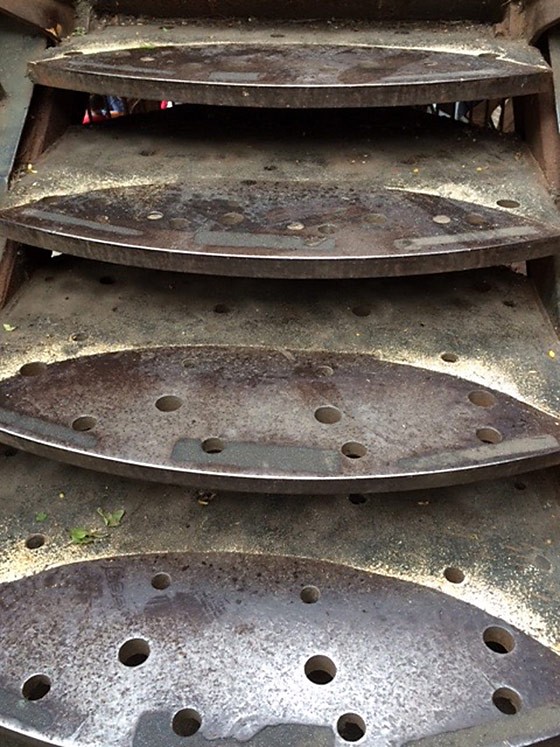 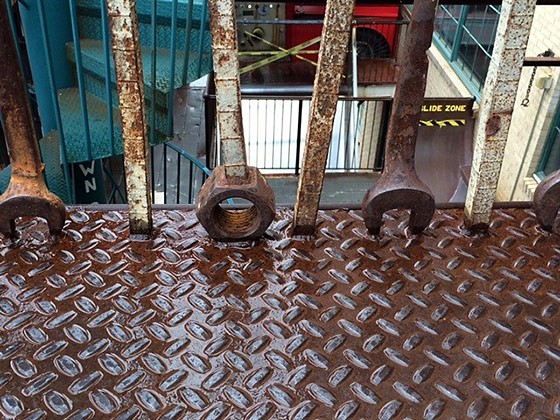 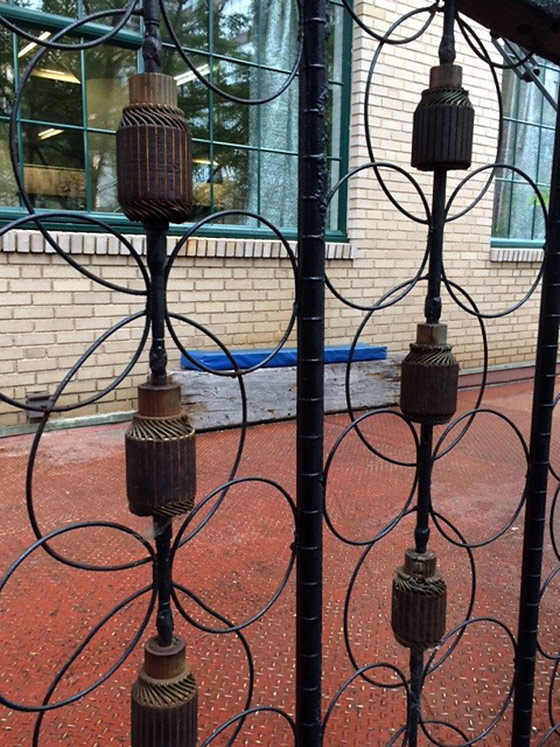 But the best part was just the sheer randomness of grouped elements that were both cool to look at, as well as integral to the structure of the building. 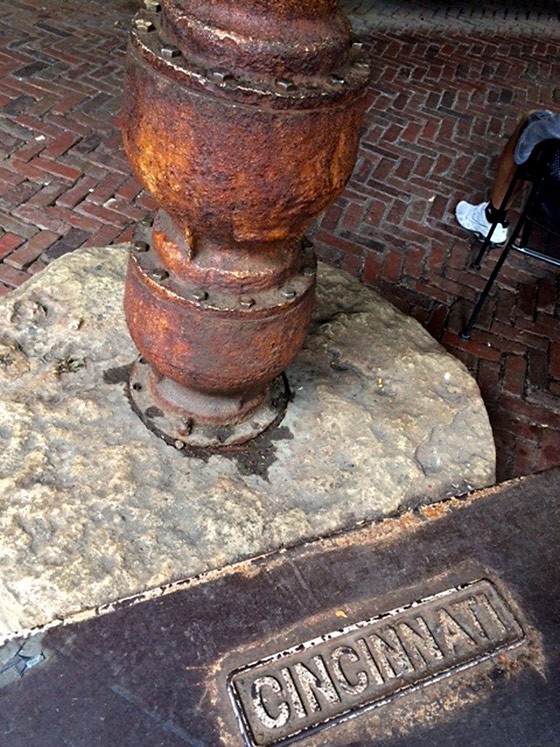 The only bummer of the whole visit was learning that Bob Cassilly died tragically in 2011 when the bulldozer he was driving flipped over. He was in the middle of creating an outdoor playground called, Cementland.