I don’t often get the chance to explore multiple approaches to a single design within one commission, so when Elizabeth asked if I would make four memorial quilts for four family members with my Lucky Penny pattern, I loved the idea. Her late husband, Justin, like many of us, owned clothing that ranged from casual to elegant – his suits had some lovely weaves, his sweaters some rich hues, and his polo shirts some bright, fun colors. 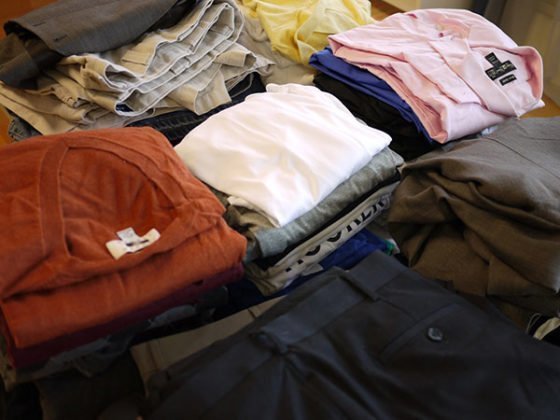 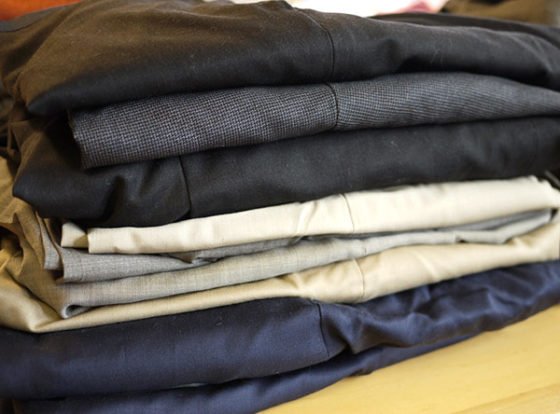 My approach for the first Penny quilt was to use a little bit of everything – suits, jeans, polos, sweaters, dress shirts, shorts, and a red pile jacket from his hometown, South Portland, Maine. 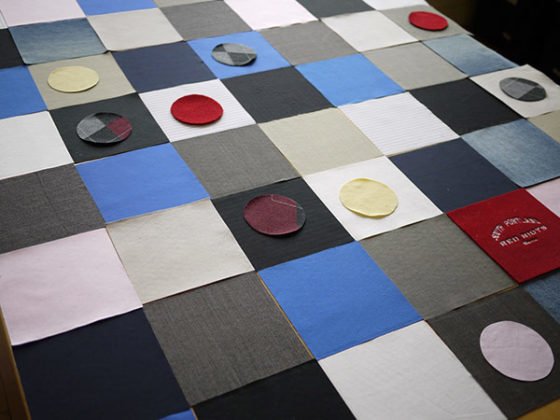 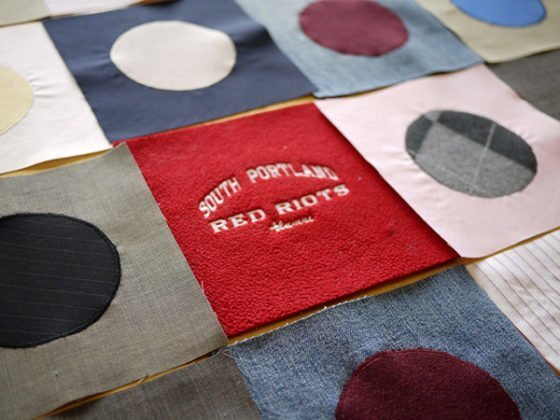 Fabric placement was made to feel intentionally random – which ironically isn’t random at all, but a well-planned practice. 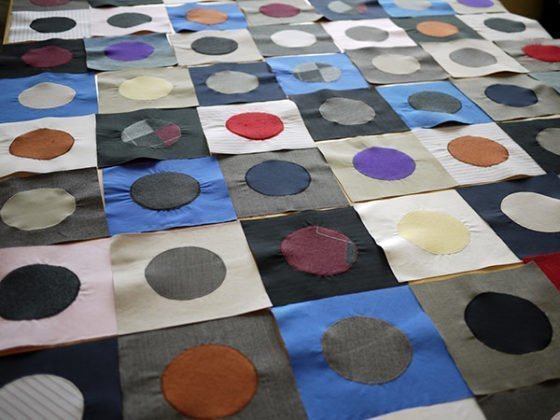 Here is the final quilt, followed by a detail. I chose a quilting pattern that felt like criss-crossing wires. Justin dedicated his career to serving a coalition of America’s rural electric cooperatives. 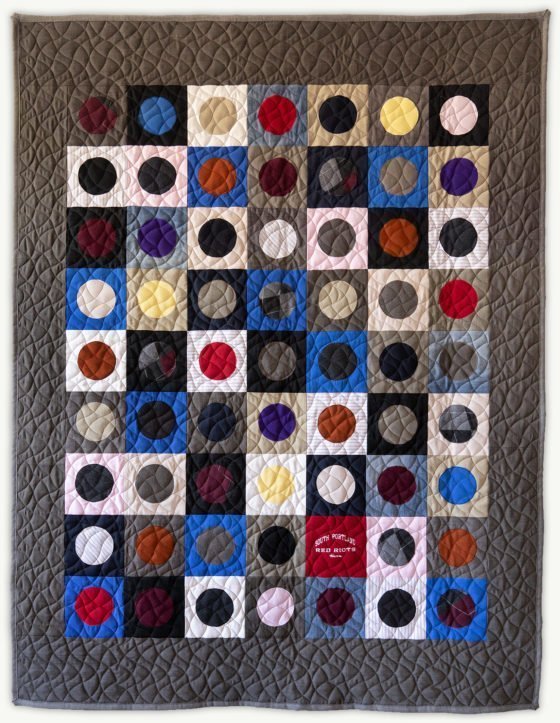 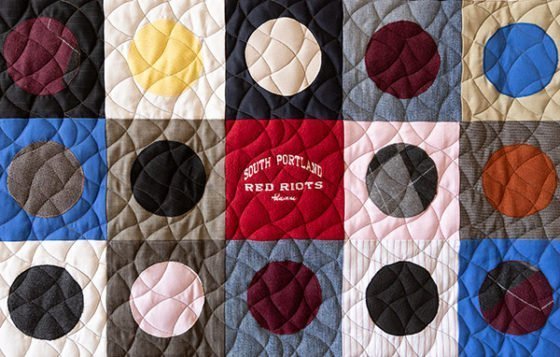 For the second Penny quilt, I decided to use Justin’s elegant suits for the squares. The circles were a combination of Justin’s rust and burgundy sweaters, some with argyle patterning, a few light-colored dress shirts, and a butter yellow polo shirt. 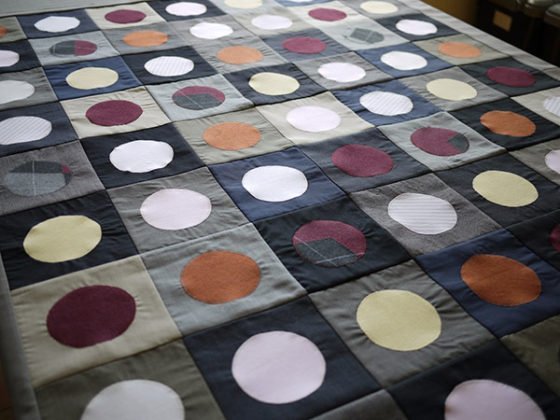 The argyle was fun to place within the circle appliqués. 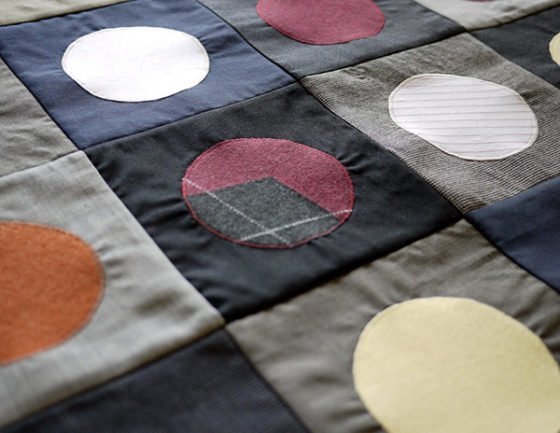 Here is the final quilt, followed by a detail. I chose a quilting pattern that again, resembled grid-like electronic circuitry. 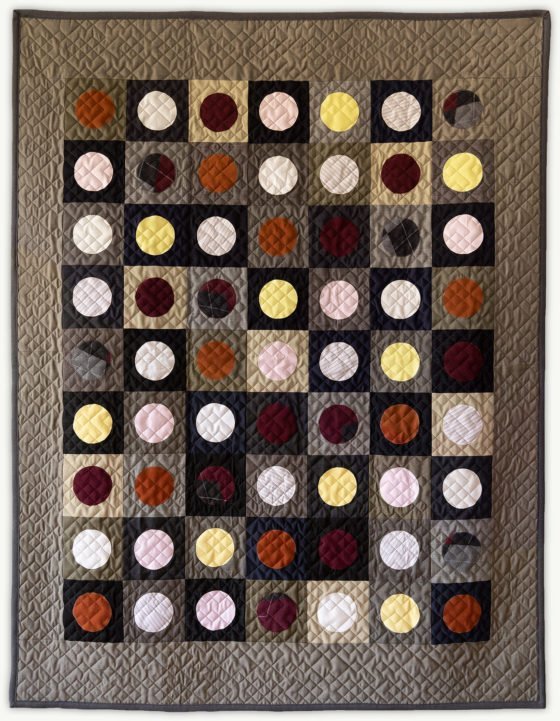 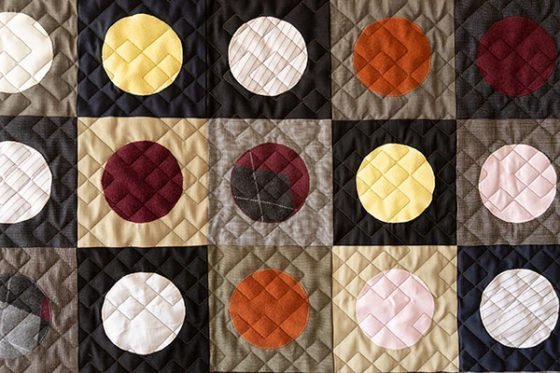 Where the first two Penny quilts employed a seemingly random placement of both the ground squares and the circles, I decided to create an ordered pattern in the color placement of the third Penny quilt. 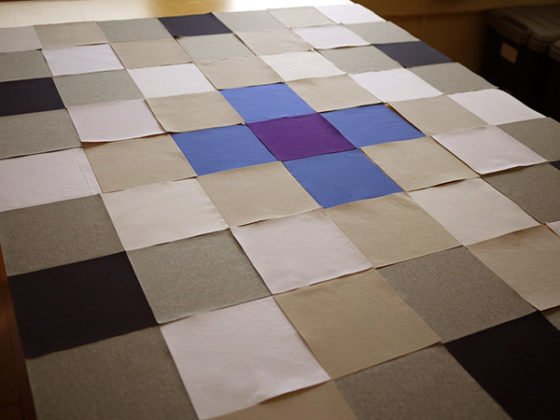 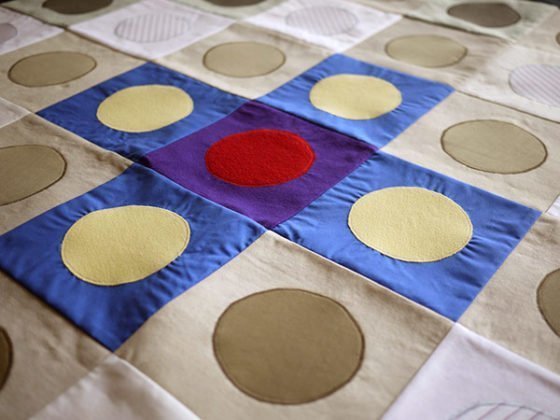 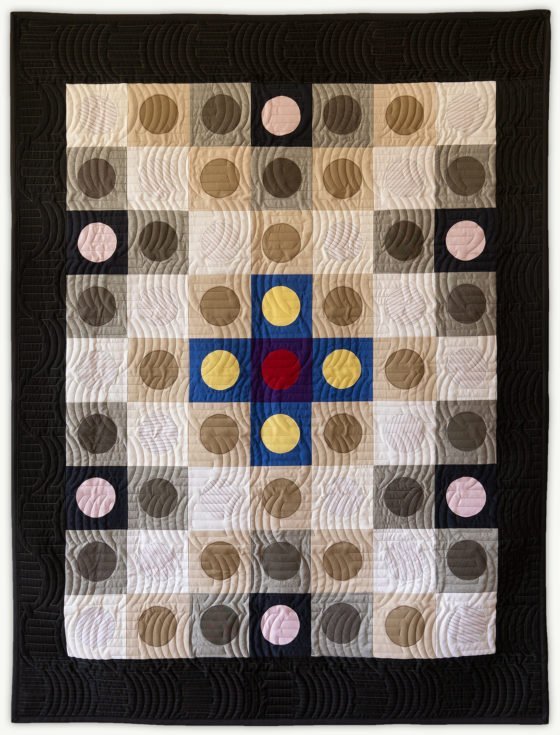 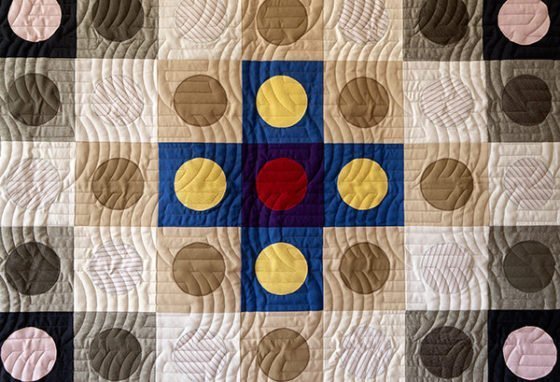 In the time between when I began the first three quilts and the start of the fourth and final Penny, Elizabeth found another box of Justin’s shirts in her closet – colorful polos which became the foundation for Lucky Penny number four. 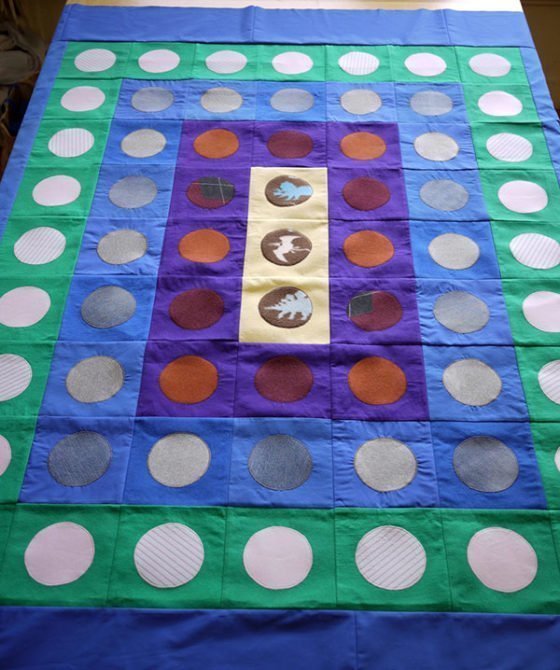 I energized the center again, but this time around with careful selections from a pair of dinosaur print fleece pajamas. 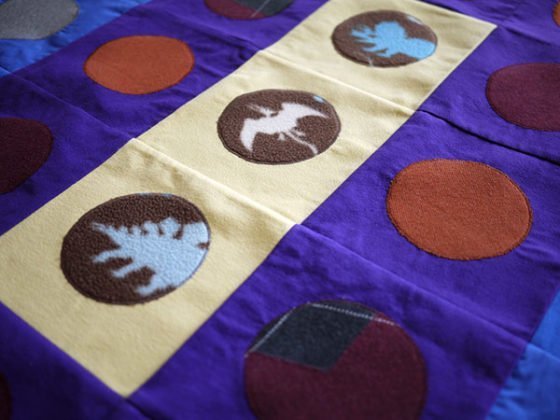 Here is the final quilt, followed by a detail. I continued the bubbly circle theme in the quilt stitching. 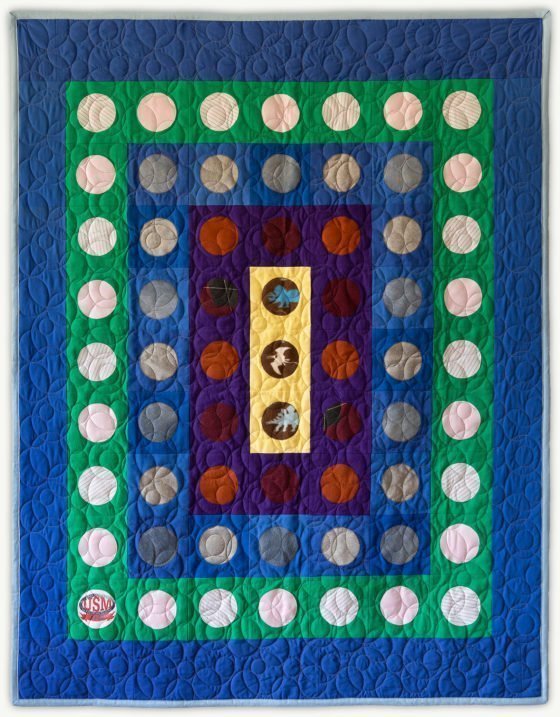 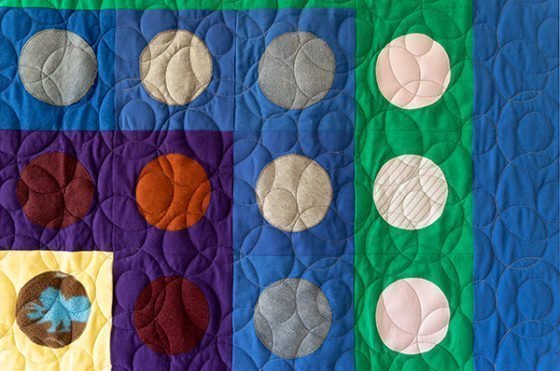 Elizabeth also ordered a set of six memorial pillows to be given to additional family members. Luckily there were enough dress shirts left for the borders and enough sweaters for the backs. 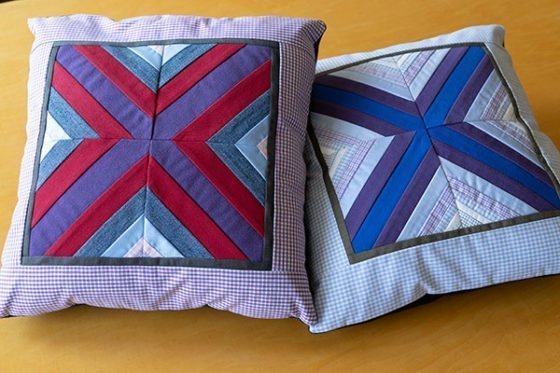 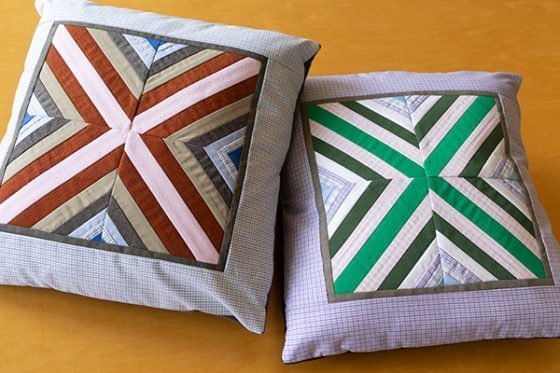 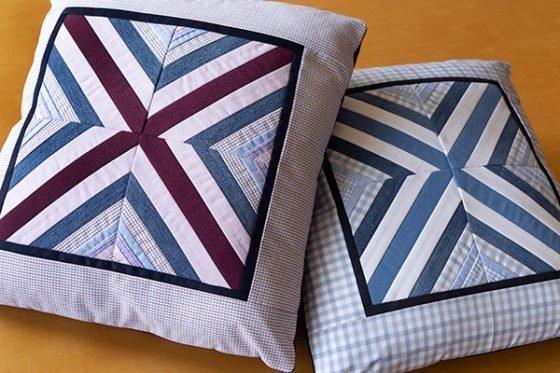 I would like to extend a huge thank you to Elizabeth and her family for joining me on this commemorative journey to honor Justin.

Stay tuned for my next post which will showcase the quilt I made for Elizabeth herself and an additional family member.