One thing was clear throughout all my conversations with Rich’s wife, Jeanne: Rich had been her soulmate, and his death an indescribable loss. I was so moved listening to her describe what kind of person he was – caring, intelligent, perceptive, and full of humor. He had a way with words and a clear understanding of what life and death meant to him. He had a deep connection with water, enjoyed fly-fishing and swimming, and loved the color blue.

Jeanne wished to have three quilts made, one for their son Dexter, one for Rich’s daughter Ella, and one for her. When I opened up the box of Rich’s clothing, it was his blue shirts that were especially lovely and plentiful. 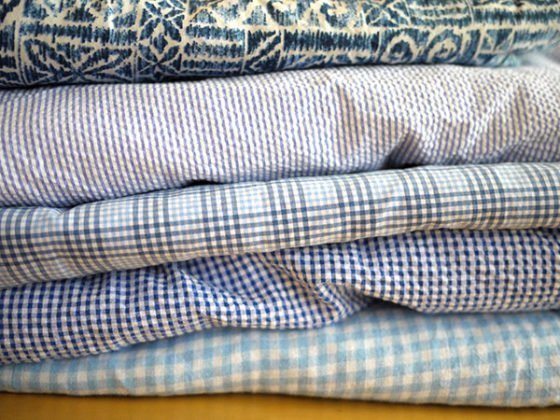 The few red-hued shirts that were included worked great as highlights amongst the cooler tones. 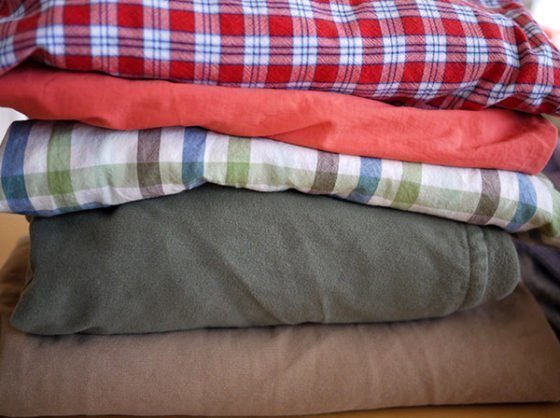 I began making Jeanne’s quilt first. She chose my Starry Night quilt pattern and asked if I could add a moon to all of the stars since her and Rich’s favorite song was Fly Me to the Moon. I loved that idea. Rich had some great darker blue shirts that made for a beautiful midnight sky background. 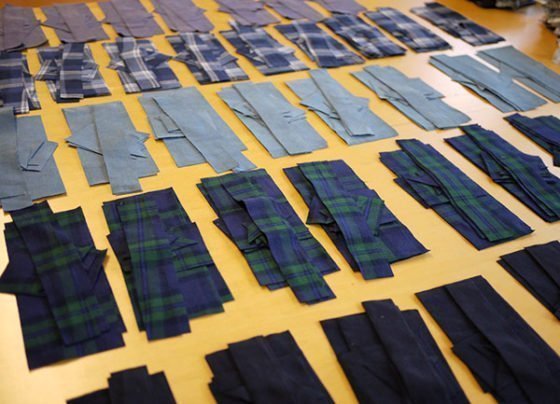 Each star block was made from small fabric pieces which required lots of pinning to keep everything straight. 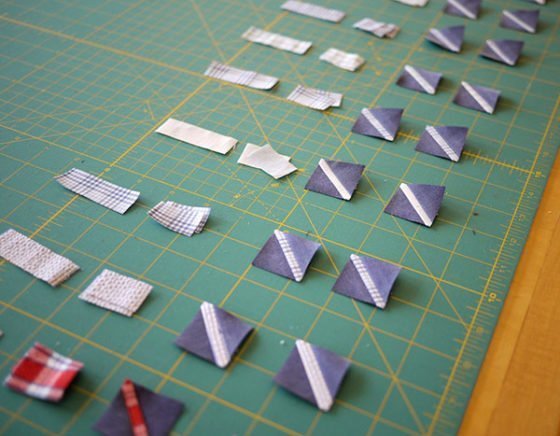 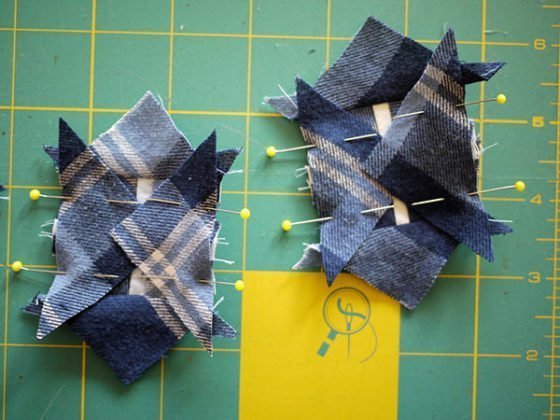 The star parts were made from the lighter blue shirts and some of the red, warmer accents. 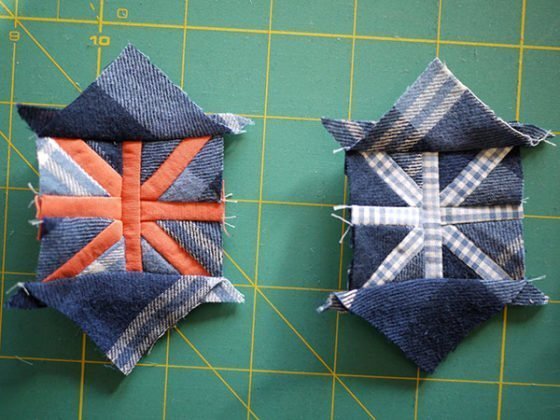 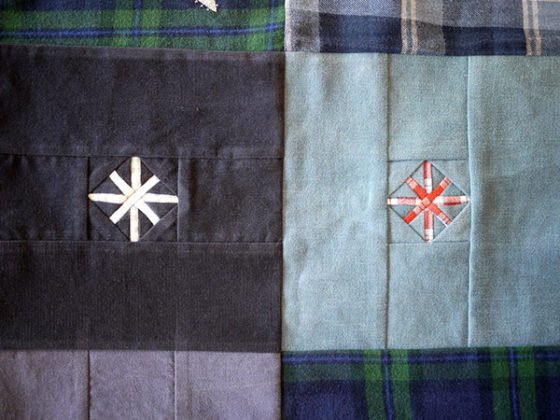 When Jeanne asked for a moon, I had to consider how big or small it should be, and how it would flow into the star blocks. I decided that if I kept the block pattern going and just removed the stars where the moon needed to go, it would integrate well. 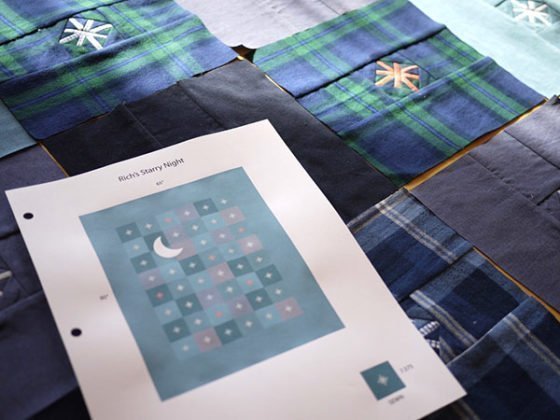 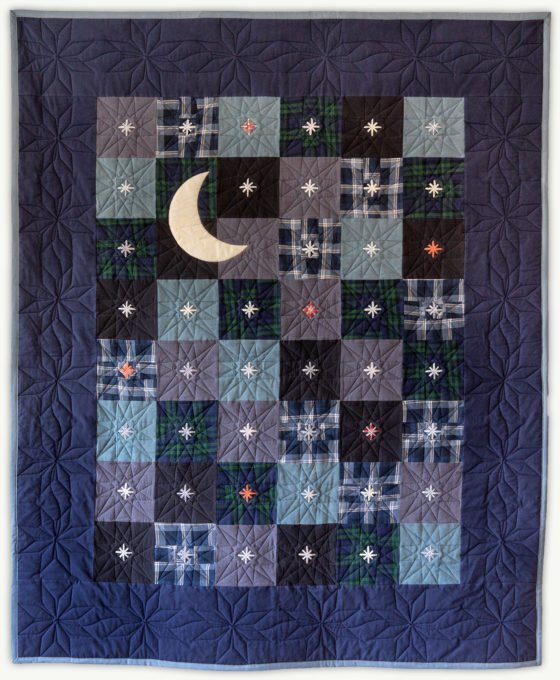 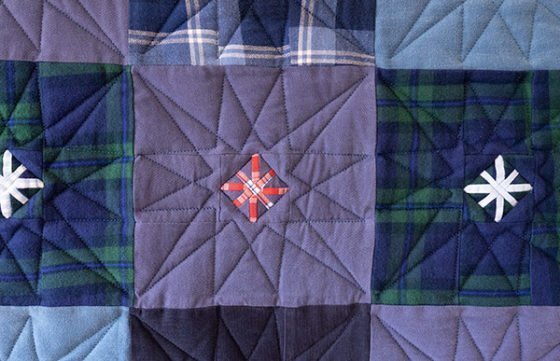 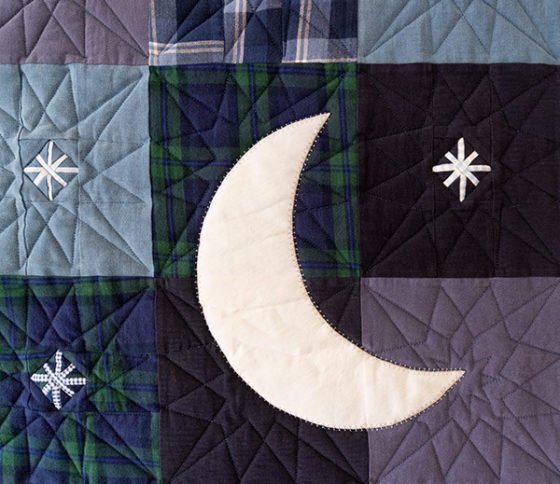 Jeanne chose to have Dexter and Ella’s quilts made with my Tree pattern. I made Dexter’s first, using Rich’s tan canvas pants and forest green jeans for the background blocks. 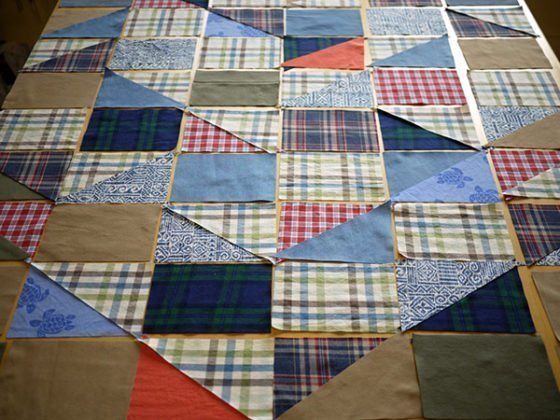 Rich had a great pair of blue turtle swim trunks that spoke to his love of water. 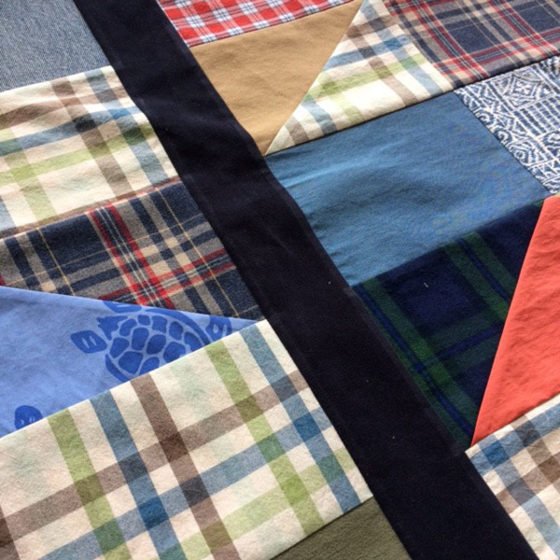 His blue jeans made a nice sky area above the tree. 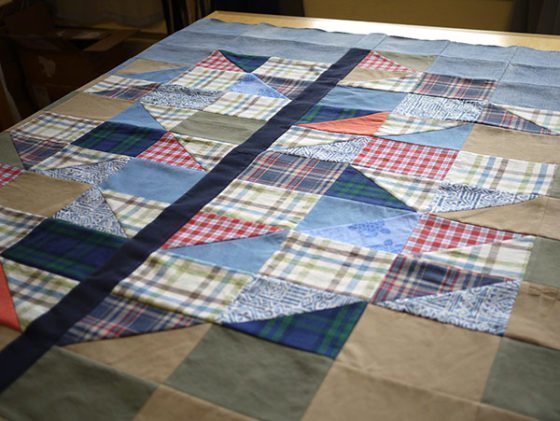 Here is the finished quilt, followed by a detail which shows the swirling water quilting. 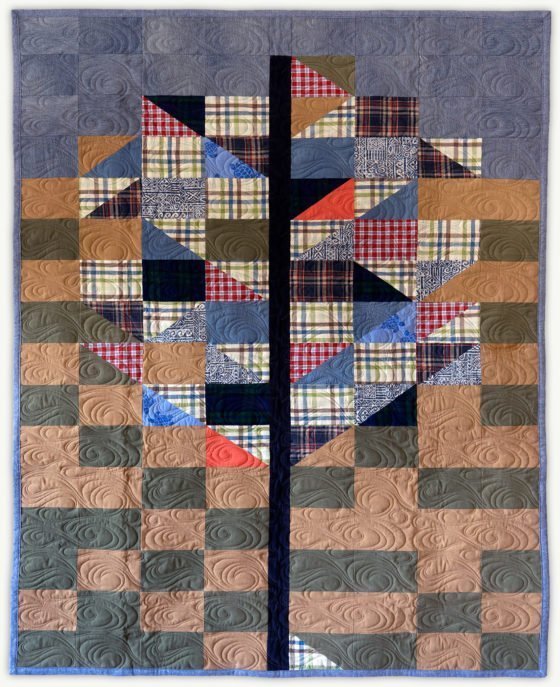 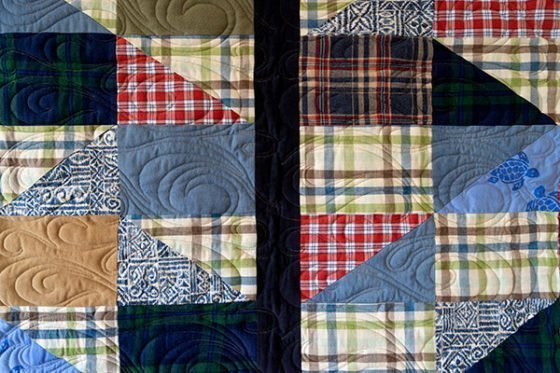 I wanted to distinguish Ella’s quilt by bringing out the reds and persimmon colors in the tree itself, making the darker blues the accents this time. 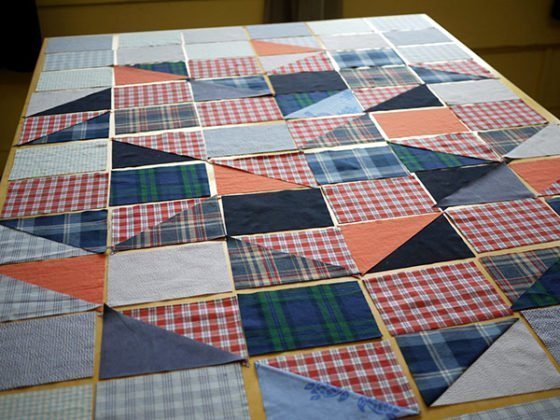 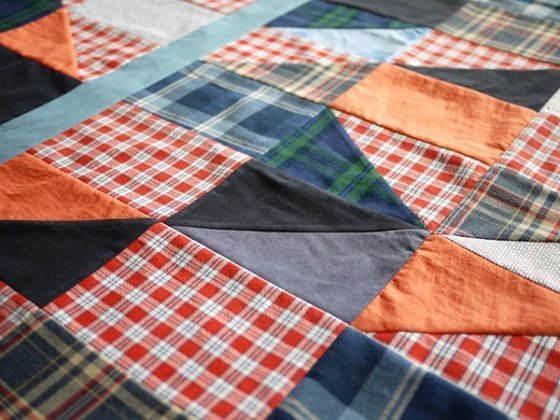 I used the light blue shirts as the background in this quilt, creating a lighter, airier feeling. 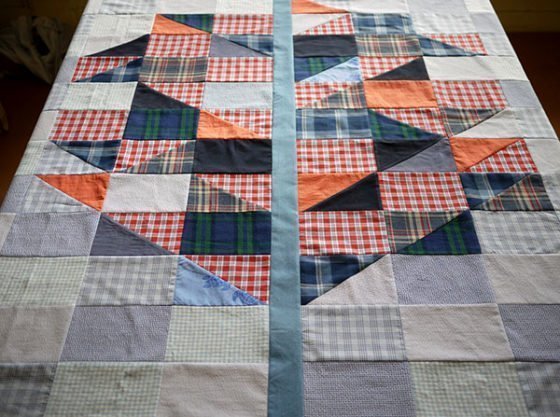 Here is the final quilt, followed by details. 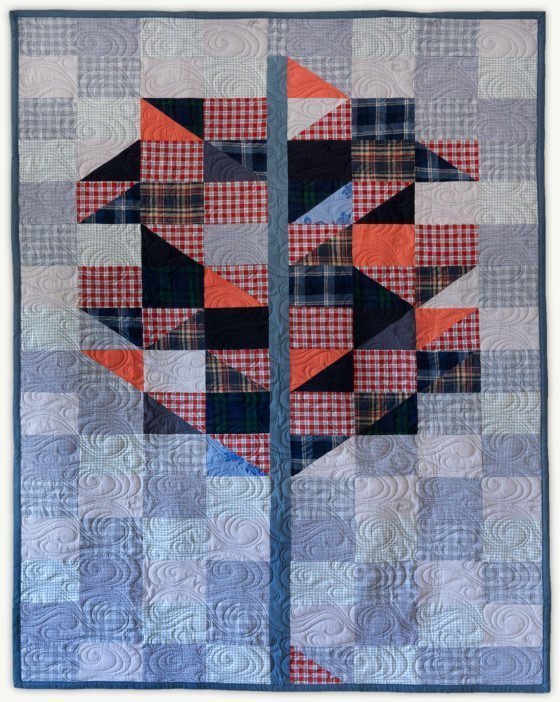 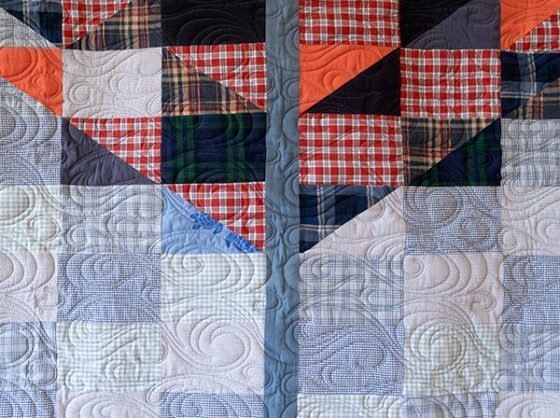 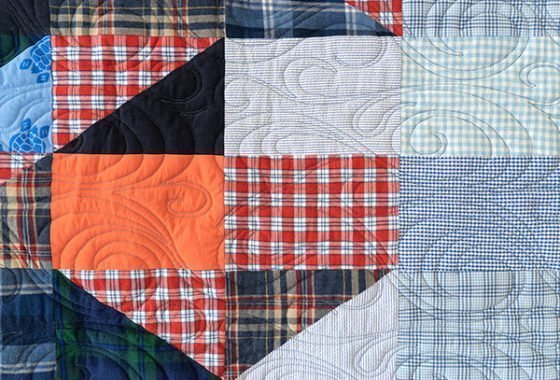 My sincerest gratitude to Jeanne for her warmth and honesty in sharing the memory of her beloved Rich with me.