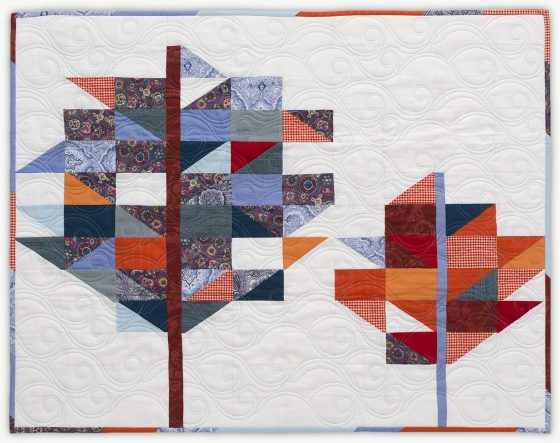 “Sam had the wisdom and intelligence of an old soul,” his mother, Donna, recounted to me, and his commitment to protecting the environment shaped his life goals. He also possessed a gentleness that allowed him to tune in to the natural world around him. Donna described how animals and insects would perch on Sam regularly when he was outdoors.

Choosing the quilt pattern for a set of memorial quilts honoring Sam wasn’t difficult. The TREE design was it. Donna wanted three quilts – one for Sam’s older brother, one for his little sister, and one for herself. She decided to use the TREE pattern for all three and asked if I could re-design her wall-hanging to include two trees next to each other. Sam’s siblings’ quilts would be functional throw-size quilts. Thus began the making of a “forest” of remembrance.

Donna sent me a box of Sam’s clothes which included a wonderful palette of color and patterns. 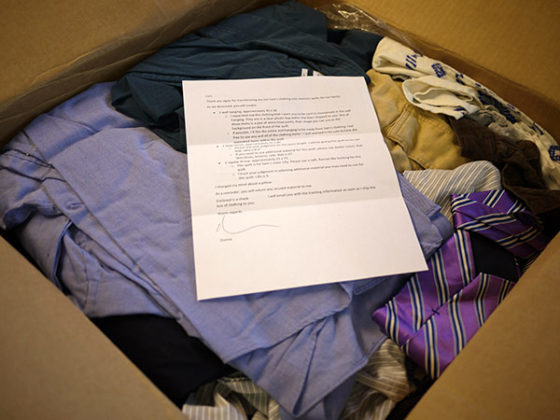 She had designated a group of garments that were to be used for her quilt, so I started with hers first. The paisleys and wild prints were a great contrast to the red gingham and other solids. 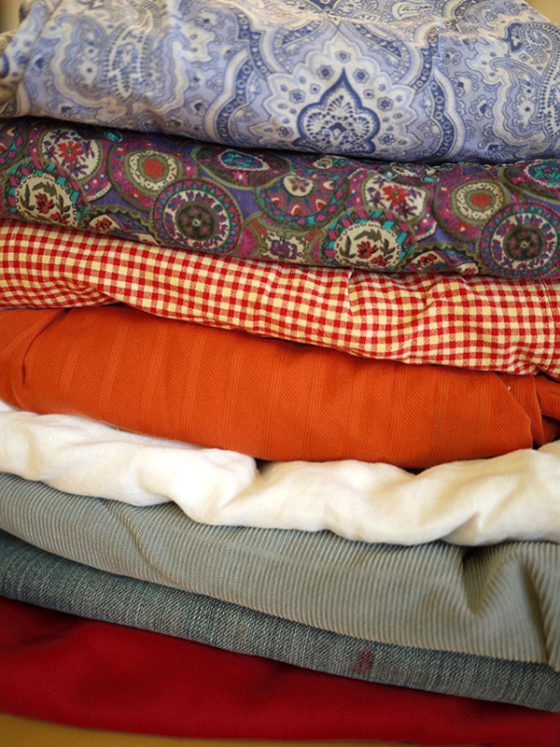 Sam had a lovely white linen shirt that became the background. 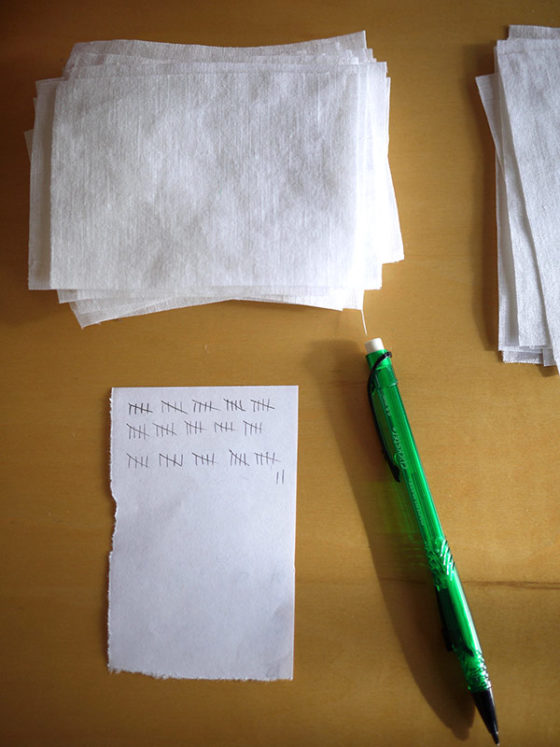 I was then able to set up a warm-cool relationship with the remaining colors. 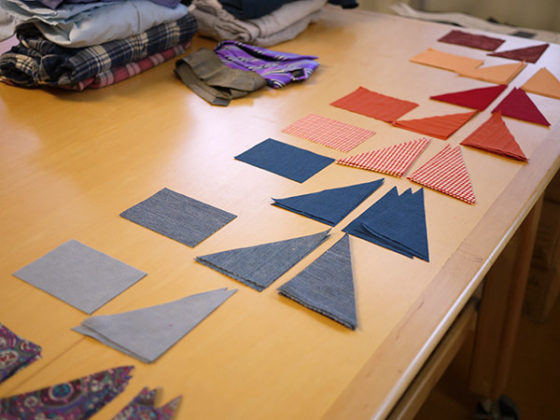 The larger tree was primarily cools with some warm pops. 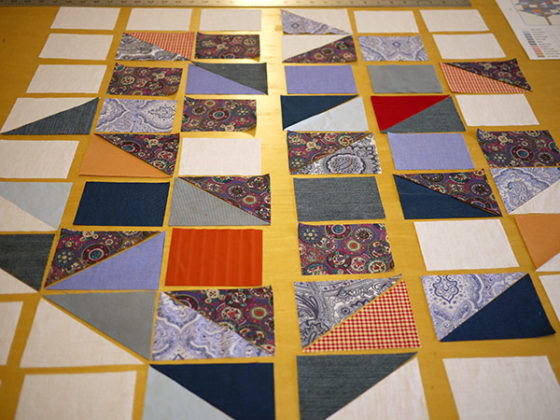 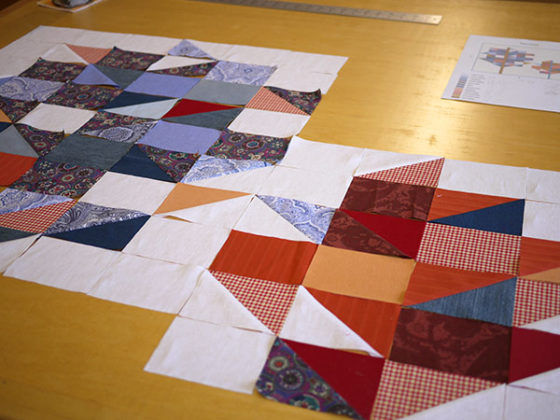 Once I established the layout, I began sewing methodically. 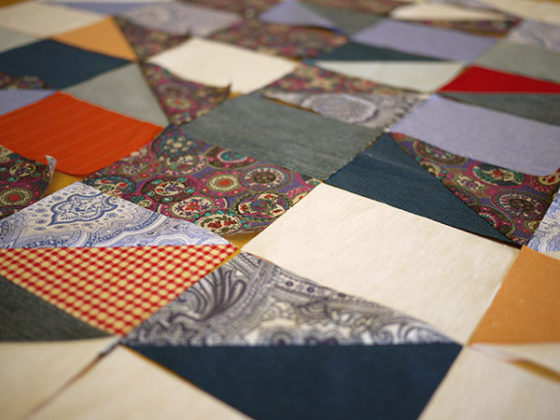 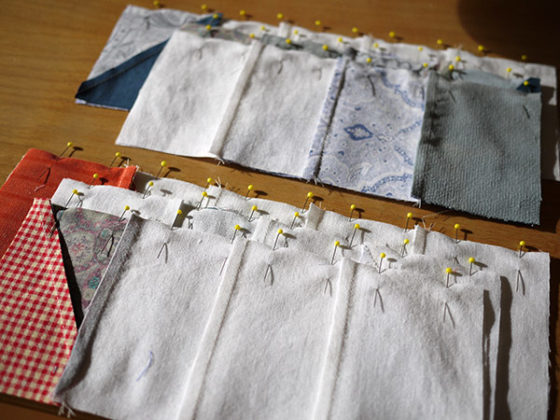 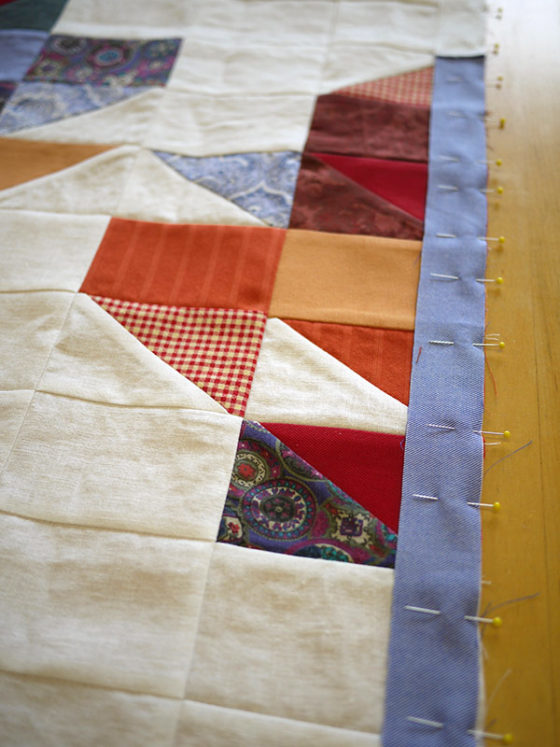 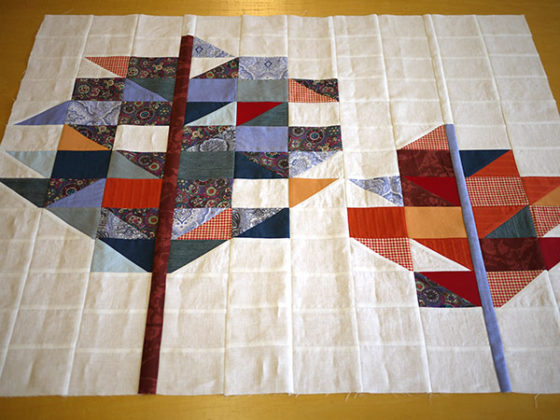 Here is the finished piece, quilted with a wind-inspired pattern, and bound with a segments of the tree fabrics.

Next came the quilt for Sam’s little sister. There was a pink plaid flannel shirt that I knew would work great as the foundation for her tree, offset by a background of denim. 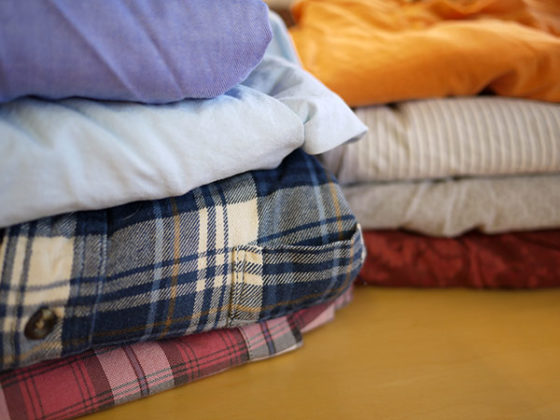 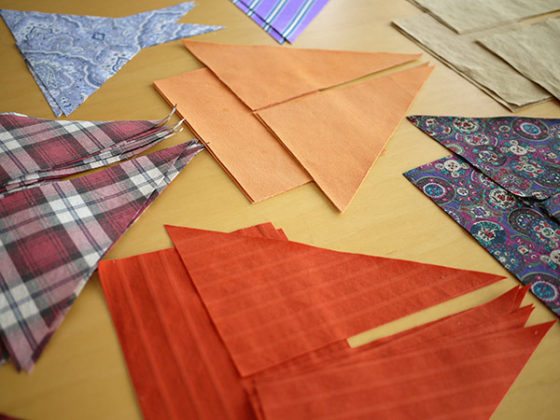 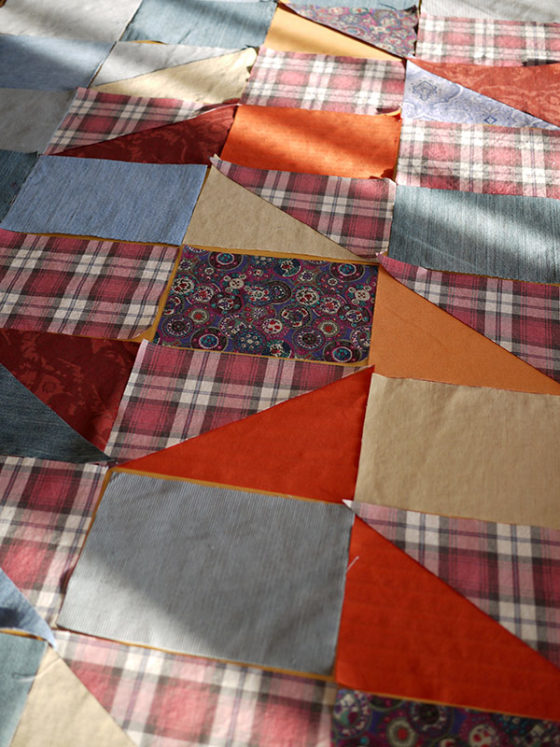 Sam’s periwinkle striped tie made for a wonderful color pop. 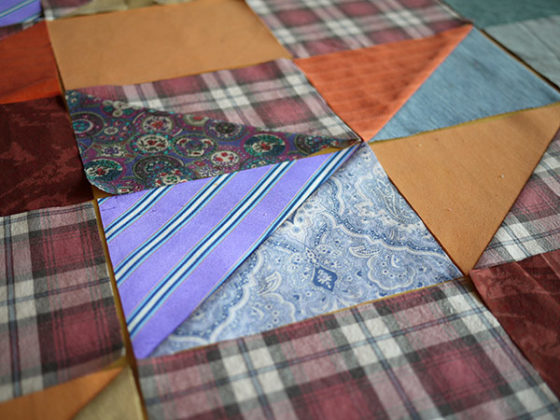 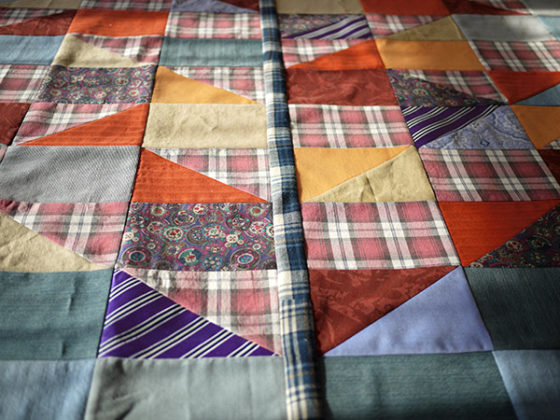 The finished quilt had a soft, flannel backing for extra comfort. 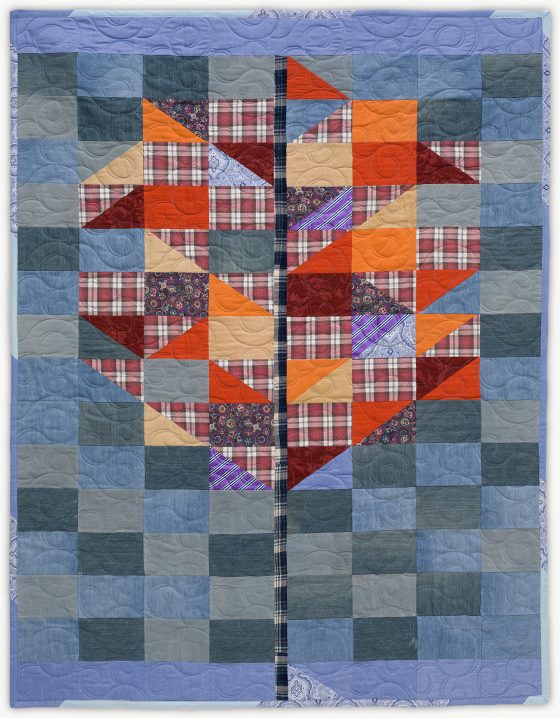 Donna requested I use some of the darker blues and browns for Sam’s brother’s quilt. The Mexican, embroidered shirt, maize-colored shorts, and bright red athletic sweatshirt offered the perfect contrast to the darker background colors. 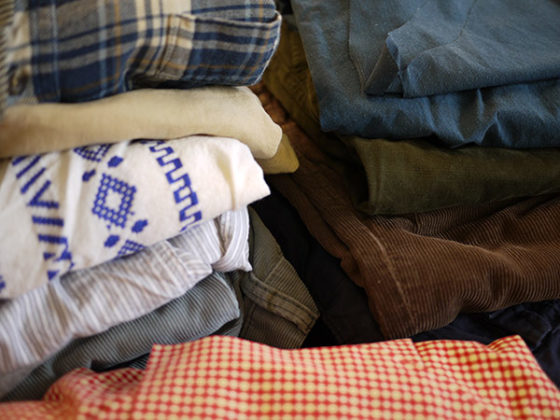 Making sure I was able to extract enough blocks from each set of pants took some careful planning. 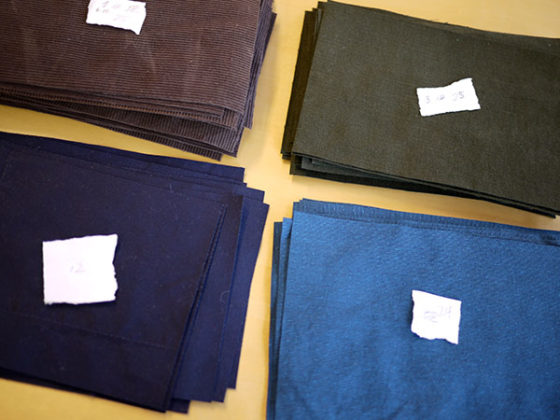 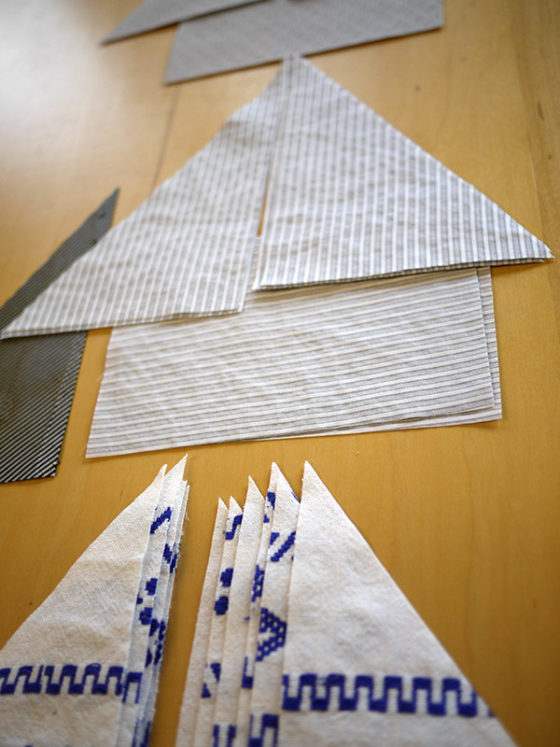 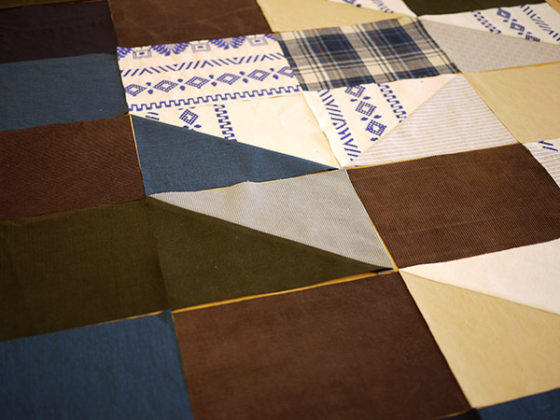 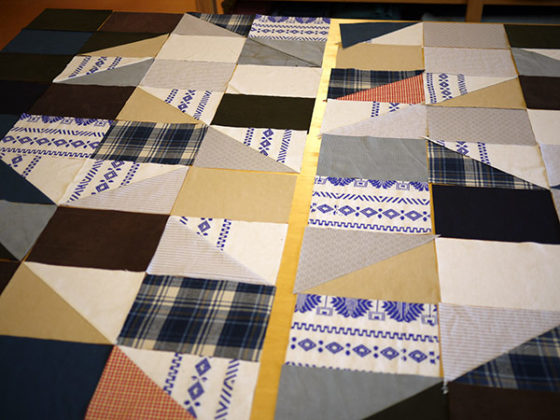 I went for the gingham plaid for a patterned tree trunk. 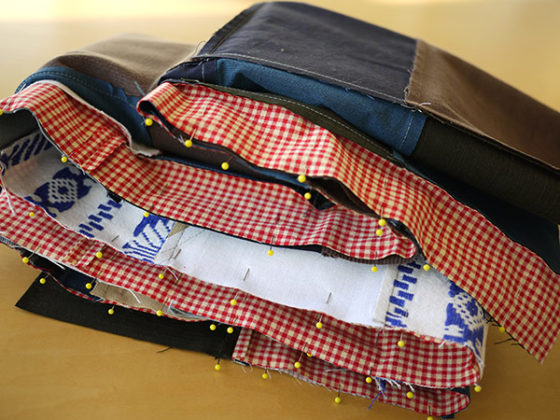 And the New York headline of Sam’s red athletic sweatshirt sat at the base of the tree. 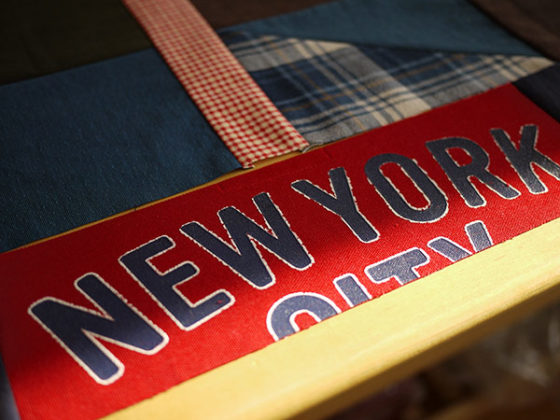 Here is the final quilt, also with a soft flannel backing and wind-inspired quilting. 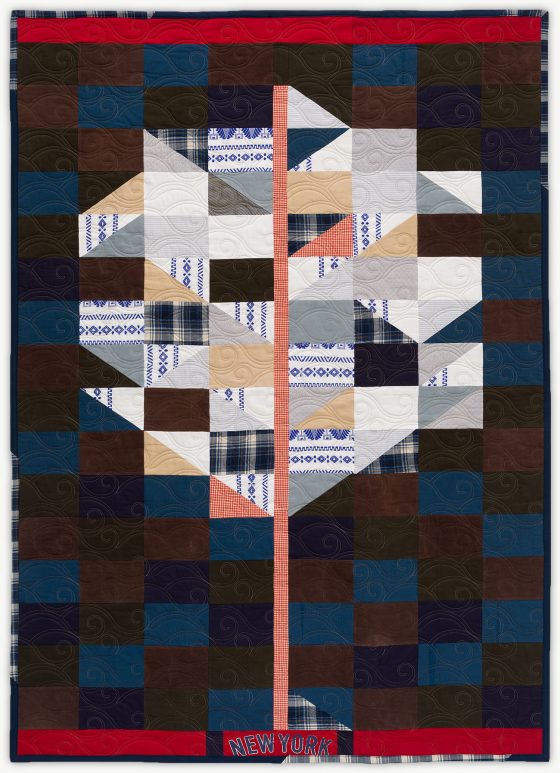 Thank you, Donna, for your trust and courage throughout this project. May your “forest” be a source of comfort for your family.