When Barbara’s niece, Anne, came to my studio to drop off Barbara’s clothing, I knew these quilts would pack a punch. The colors and patterns were bold and strong, much like the woman herself, as I learned more about her from Anne. Barbara had been the head of mental health for the state of Connecticut, as well as having run a congressional office in Washington D.C. As Anne explained to me, everything Barbara did was focused on serving others. She was socially and politically active and had a huge community of friends and colleagues. In honor of her dedication to serving the homeless population in Connecticut, a transitional housing project in New Haven was named after her. Barbara had three adopted children who felt a deep loss after their mother’s death. Anne asked that I make them each a throw sized quilt with Barbara’s exquisite clothing.

I began with the quilt for Barbara’s daughter, Sadie. We chose my Frances quilt pattern, and Anne asked that I make sure to use some of Barbara’s pink dress in Sadie’s quilt. 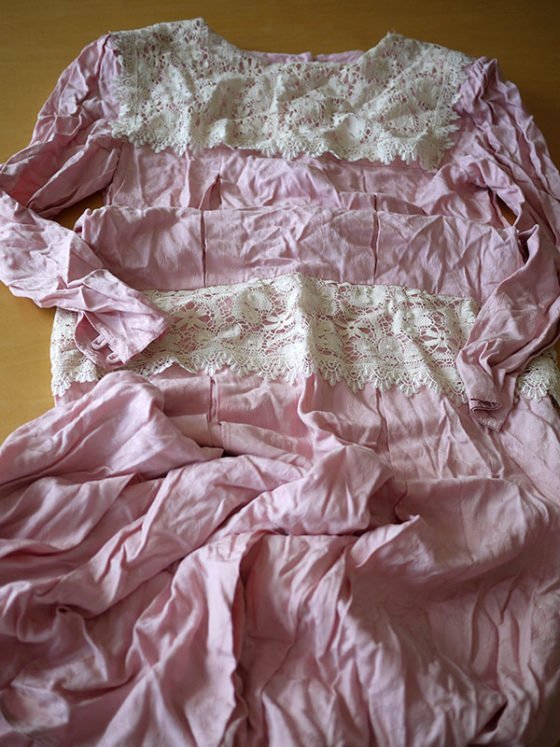 I also decided to use Barbara’s collection of velvet burnout scarves as well as a group of her purple/violet colored garments. 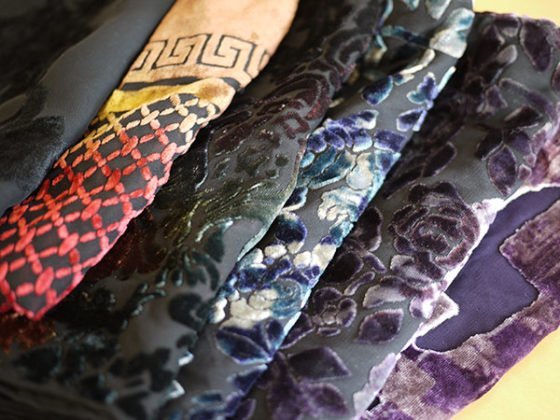 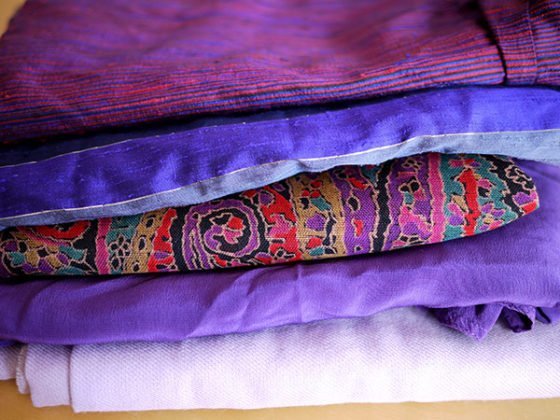 I made the center out of her silk striped blouse and her crimson velvet scarf – the heart center. 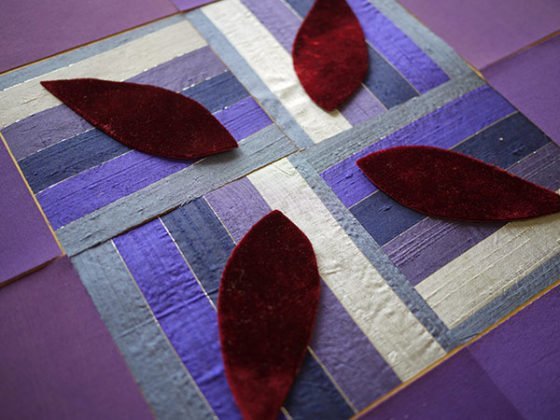 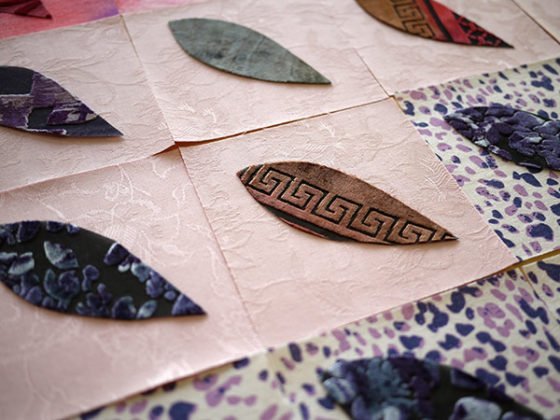 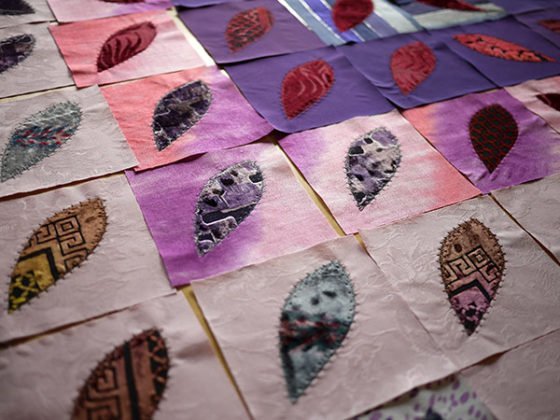 Barbara’s purple silk dress was perfect for a dark, solid border to contain the starburst. 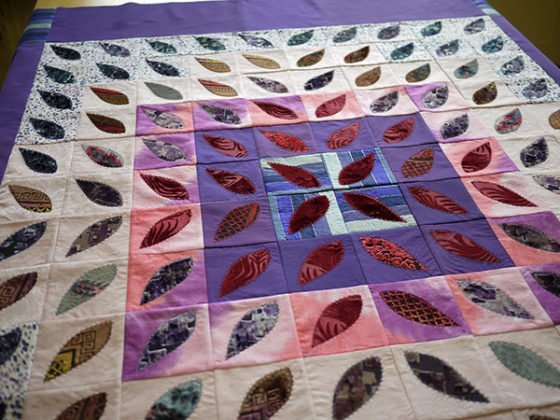 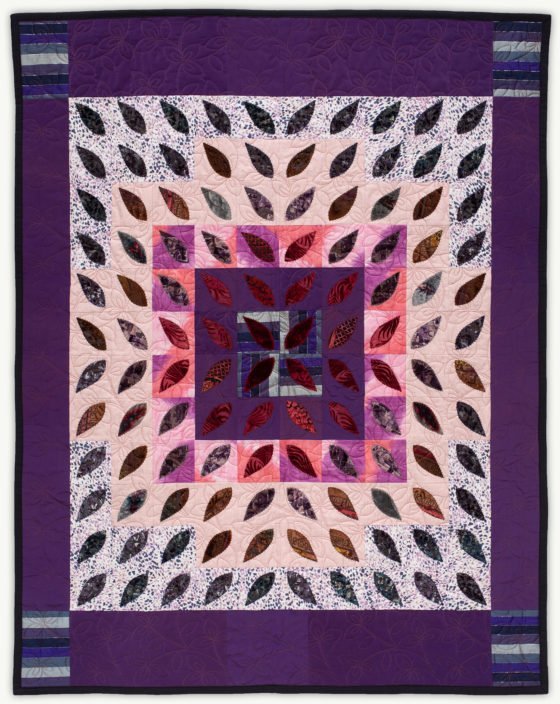 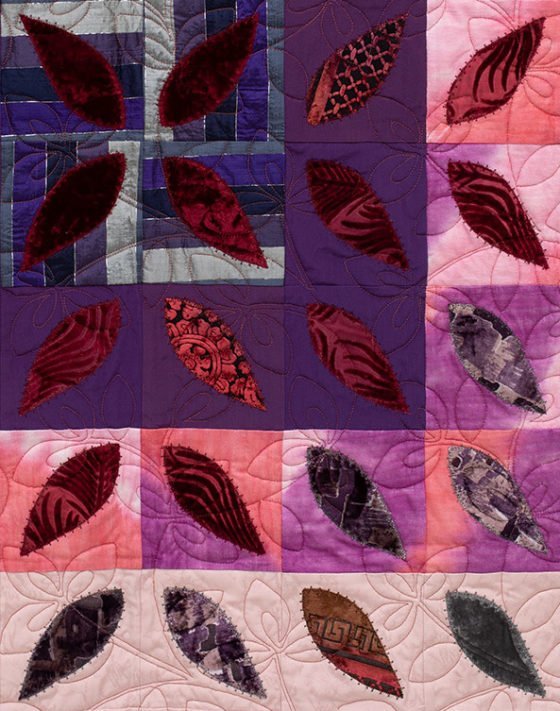 Next up was the quilt for Barbara’s son, Jacob. I used Barbara’s grey and neutral colored garments for the block foundations and for the border. 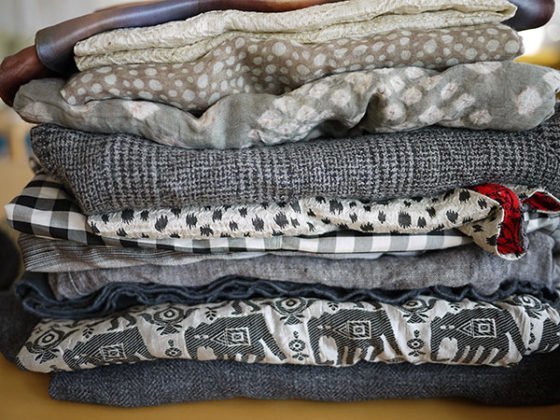 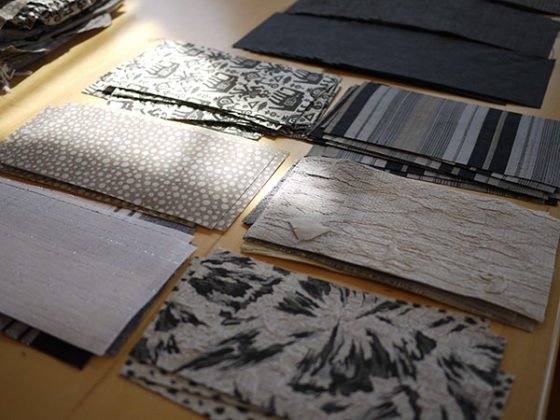 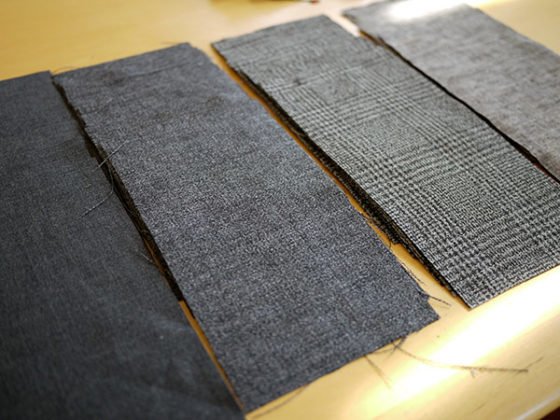 This was the layout for the center blocks that would then have the flower petals appliquéd on top. 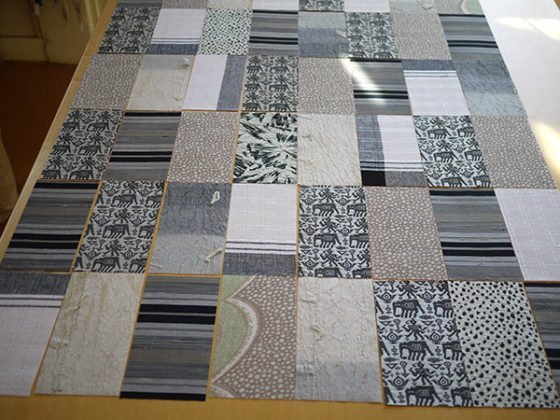 I used a limited combination of Barbara’s more colorful clothing for the petal shapes. 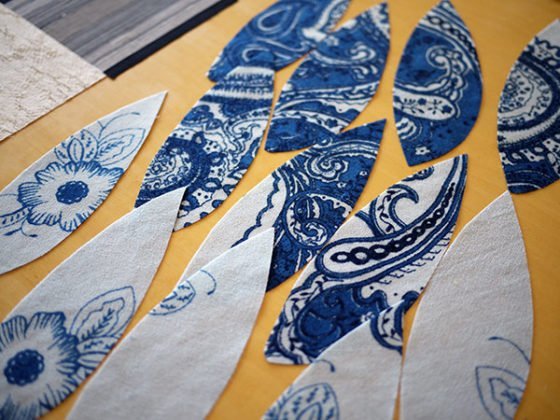 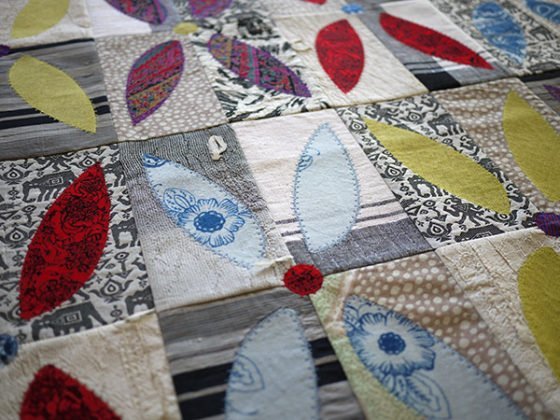 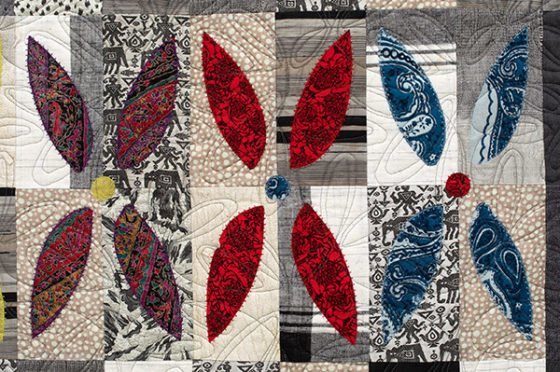 Last, but not least came Dereck’s quilt. Anne chose my Penny quilt pattern, which was excellent because I ended up making it a total mish-mash of all the other garments. I saved this blue shirt of Barbara’s that had line drawings of African animals on it. Barbara’s favorite animal was a giraffe. 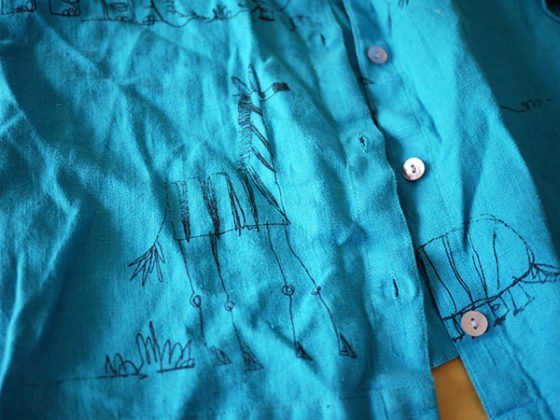 The other garment I saved out for Dereck’s was this jacket. 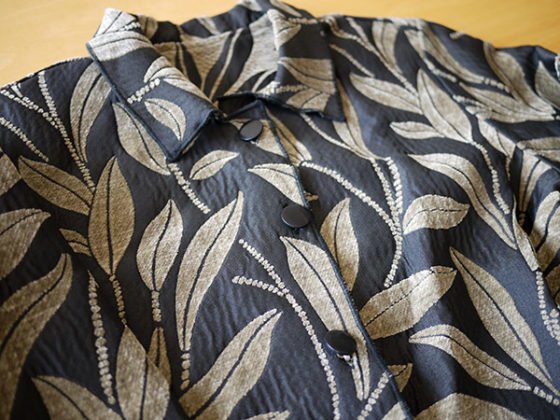 It made great “pennies”. 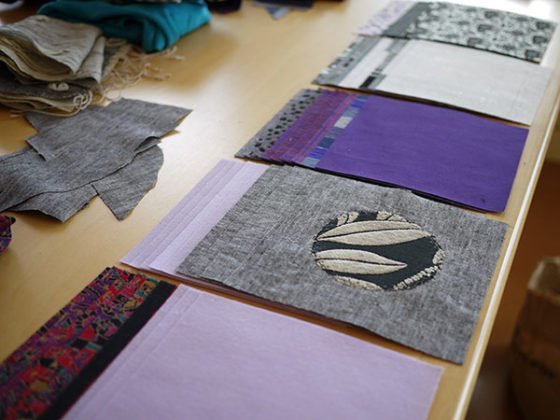 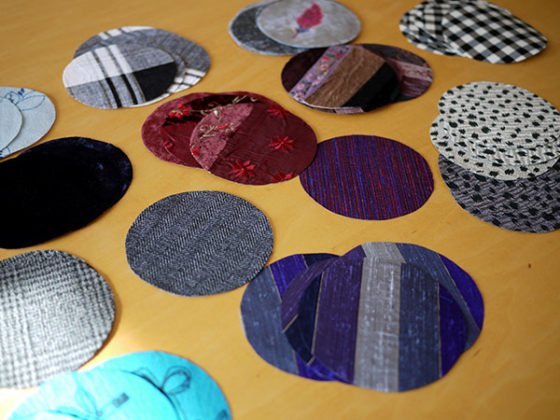 So did the blue shirt animals. 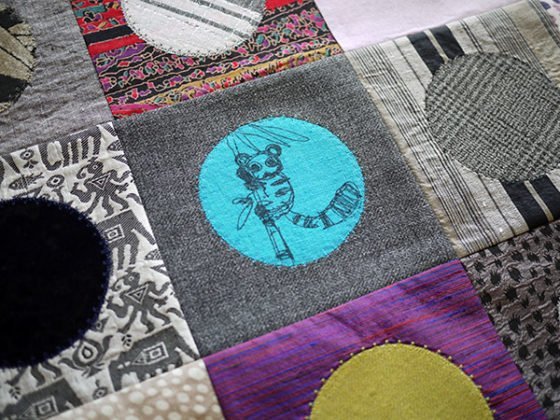 I had a delightful time mixing and matching. 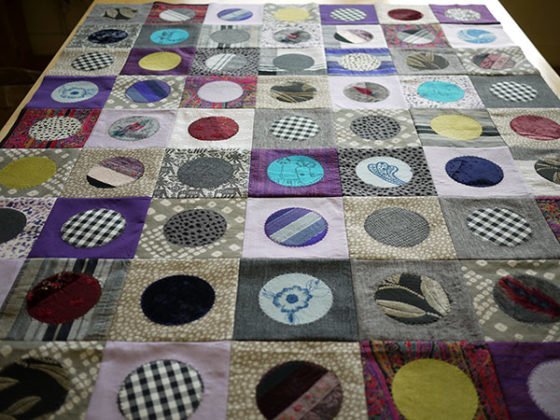 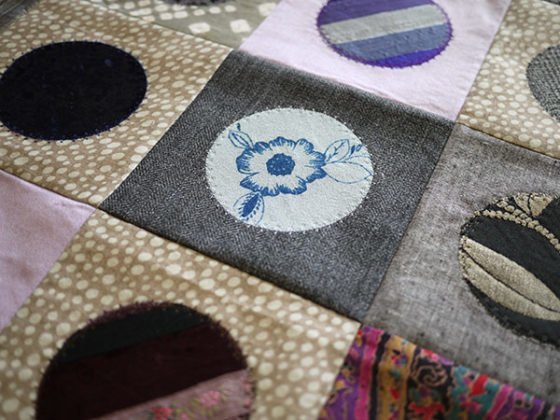 Here is the final quilt, with a sandy linen border that really brought all the colors forward. 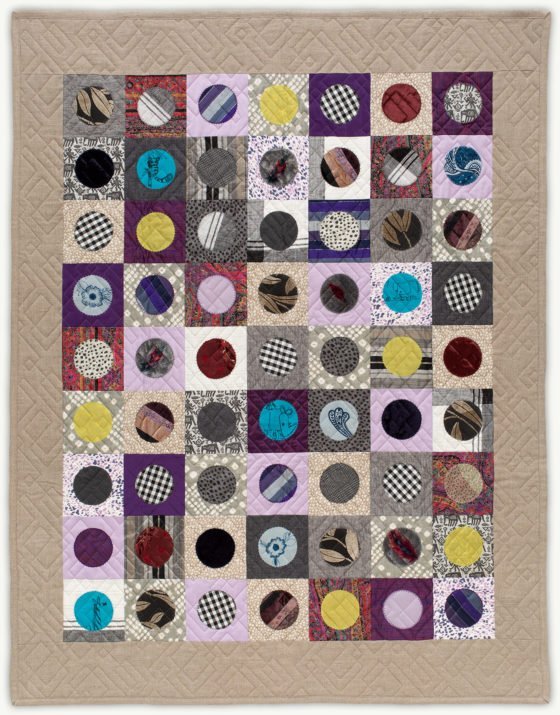 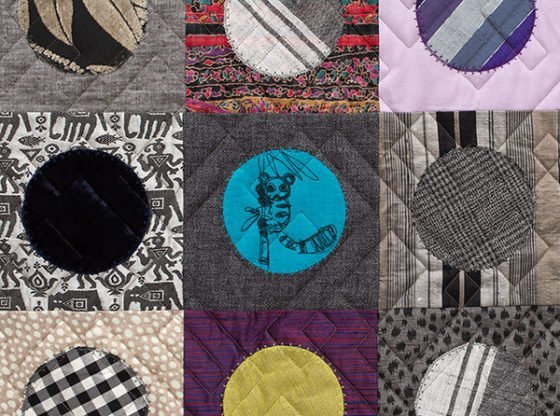 Bold, strong, colorful quilts in honor of the woman who wore them.